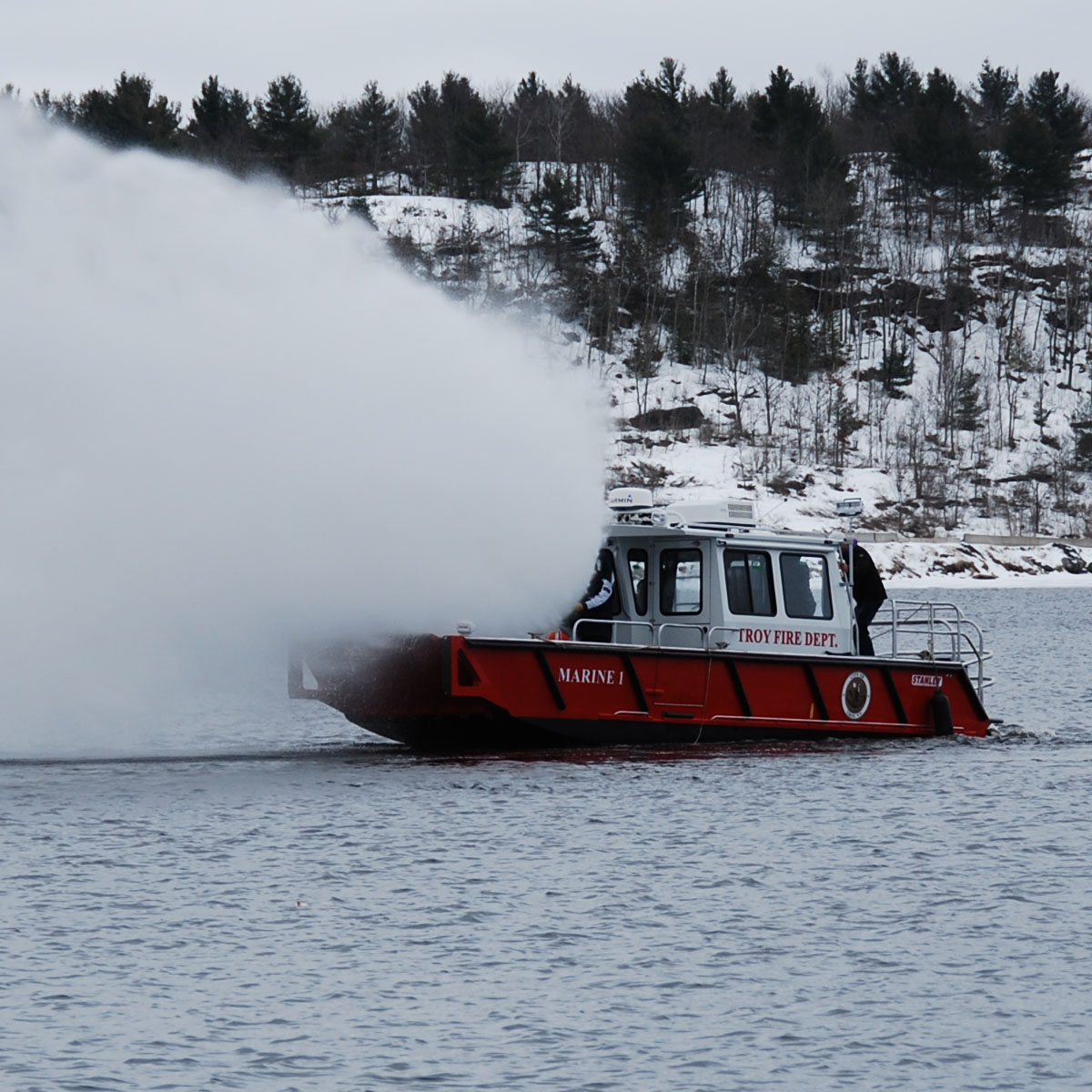 Stanley Boats, a division of Connor Industries, in Parry Sound, Ontario, Canada, is a builder of aluminum fire and rescue boats. Doug Coupar is the company representative for the United States and the Caribbean.

“The market in North America consists of three broad categories,” Coupar said. “We have boats that are dedicated firefighting vessels. Then we have combination fire and rescue boats. And there’s a strong emerging market for rescue boats, pure and simple.”

Coupar said boats come in a variety of lengths and sizes with a variety of missions, including specialty boats used by search and rescue teams as well as police responders.

“Where I find myself the busiest is in the fire rescue and rescue boat market,” Coupar said. “I am typically quoting for departments that are now finding they have a need for a marine asset in their fleet.”

Many of the boats Stanley Boats build start at 24 feet and go up to more than 40 feet, Coupar said, adding that the larger boats are typically dedicated to fire suppression, although some have multi-purpose missions.

“We rely on boats for much more than transportation,” Coupar said. “We need them for whatever is necessary. In an extreme emergency, there may be no other way to provide the assistance than by boat. I predict in the coming decades, boats will become more and more the standard for all emergency agencies.”

Coupar said that the increased frequency of bad weather, including hurricanes and lots of flooding on the eastern seaboard of the United States, has forced many departments to consider adding some sort of boat to their arsenals.

“Demand for rescue boats is like we’ve never seen before,” Coupar said, adding that weather changes have caused flooding and water emergencies in areas that had previously been unaffected. That has left many departments scrambling to purchase rescue boats.

Often departments are left to their own devices in times of water emergencies, Coupar said. State and federal agencies are swamped and they can’t provide assets as readily or as rapidly as they once did because of increased demands.

“The hurricanes we saw in Texas and Florida were more extreme than usual,” Coupar said. “Hundreds of agencies did not have the assets they needed for the immediate needs of their communities.”

The demand was greatest for boats that could navigate shallow, debris-filled water, Coupar said.

The extreme weather has caused nearly all responders along waterways to look at their marine responses to figure out “what they can and cannot do,” Coupar said.

Coupar said the American waterway system is complex and interconnected from the Great Lakes to the Mississippi River to the Gulf of Mexico. Water can quickly overwhelm a geographic area and, with nowhere to drain, flooding can go on for weeks, Coupar said, leaving communities with boats as the only means of access to flooded areas.

Stanley Boats makes aluminum vessels with modified V-bottoms that flatten out, Coupar said, allowing them to navigate the shallowest of water safely, and navigate deeper waters as well.

Coupar said Stanley Boats are aluminum, so they are lightweight and can be transported easily by trailer if needed. Most are powered by outboard motors, but the company also has jet-powered boats available, which are well-suited for extremely shallow waters.

Coupar said once an agency has determined they have a need for a boat, the officers and users have to determine the fundamental needs.

“Every department will have its own ideas on how to approach the purchase, but all the officers and everybody have to be clear about the mission,” Coupar said.

Lightweight, purpose-built boats can be towed to the nearest launch point and go to work almost immediately, Coupar said. They represent a “very modest acquisition” for most departments and training is readily available and the boats can be staffed as needed, he added.

Larger boats, up to 30 feet and more, need dedicated staff, usually 6 to 12 people, so agencies have to think about those commitments of resources and how it will affect the mission, Coupar said.

Coupar also suggested that departments and emergency response agencies should work with neighboring departments to develop mutual-aid agreements and response plans as they consider what kind of boat to purchase.

“You should look beyond your jurisdiction,” Coupar said. “Look at projected flooding for your area and your state.” He said the National Oceanic and Atmospheric Administration (NOAA) has highly accurate maps that are updated frequently. Those maps offer a good bases from which to build a response plan and to determine the number of marine resources needed.

“In a flooding emergency, most often they can only be answered by a marine unit,” Coupar said. “…We have designated life-support units, dive units, units that work in complete darkness. We have high-speed units that can travel to incidents several miles away and get there in minutes.”

It’s important to determine how each marine asset fits into the region and the jurisdiction, Coupar said.

“Sometimes, people just need to step into a boat to escape from whatever is coming and that’s all that’s needed,” Coupar said.

And, sometimes, much more is required and boats become the only means to provide life-saving services and fire protection.

“There are always parts of the population that don’t want to evacuate,” Coupar said. “They ignore orders and the announcements officials give saying there’s nothing they can do. We don’t want to suggest that we can overcome these challenges, but boats can be the first in to help with rescues.”

There are some departments that want boats to do everything, Coupar said. They want fire suppression capabilities and Stanley Boats offers pumps from all the manufacturers in sizes from 500 gpm to the most popular size of 1,500 gpm.

“We rely on boats for much more than transportation,” Coupar said. “We need them for whatever is necessary. In an extreme emergency, there may be no other way to provide the assistance than by boat. I predict in the coming decades, boats will become more and more the standard for all emergency agencies.”

We use cookies on our website to give you the most relevant experience by remembering your preferences and repeat visits. By clicking “Accept”, you consent to the use of ALL the cookies.
Cookie settingsACCEPT
Manage consent

This website uses cookies to improve your experience while you navigate through the website. Out of these, the cookies that are categorized as necessary are stored on your browser as they are essential for the working of basic functionalities of the website. We also use third-party cookies that help us analyze and understand how you use this website. These cookies will be stored in your browser only with your consent. You also have the option to opt-out of these cookies. But opting out of some of these cookies may affect your browsing experience.
Necessary Always Enabled
Necessary cookies are absolutely essential for the website to function properly. These cookies ensure basic functionalities and security features of the website, anonymously.
Functional
Functional cookies help to perform certain functionalities like sharing the content of the website on social media platforms, collect feedbacks, and other third-party features.
Performance
Performance cookies are used to understand and analyze the key performance indexes of the website which helps in delivering a better user experience for the visitors.
Analytics
Analytical cookies are used to understand how visitors interact with the website. These cookies help provide information on metrics the number of visitors, bounce rate, traffic source, etc.
Advertisement
Advertisement cookies are used to provide visitors with relevant ads and marketing campaigns. These cookies track visitors across websites and collect information to provide customized ads.
Others
Other uncategorized cookies are those that are being analyzed and have not been classified into a category as yet.
SAVE & ACCEPT