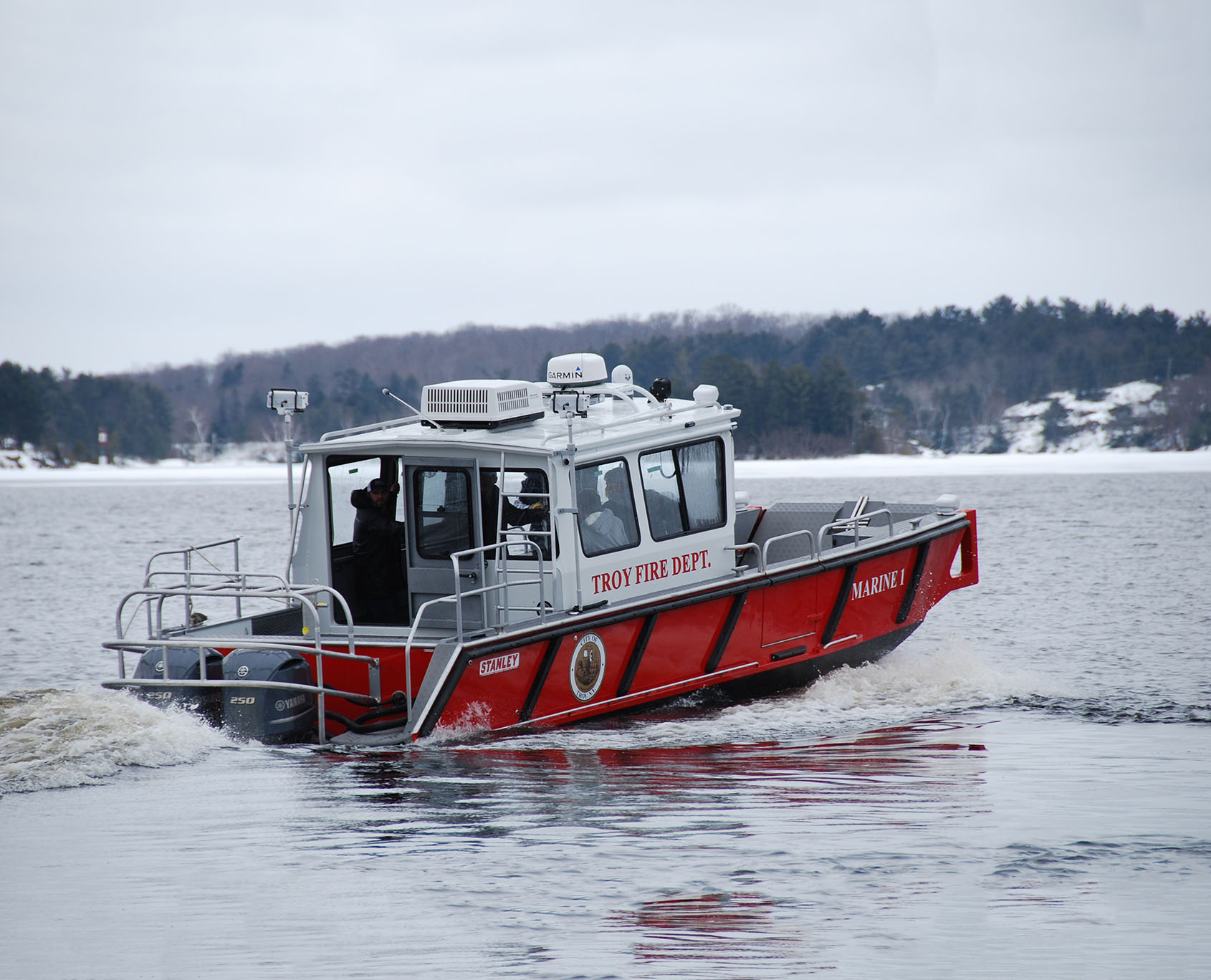 The Troy (NY) Fire Department is responding to incidents on and along the upper Hudson River with its new Stanley 32-foot high-speed fire-rescue boat.

Eric McMahon, Troy Fire Department’s assistant chief, says that the department applied for and received a Port Security Grant that made the purchase of the fire-rescue boat possible. “We put out our specifications that stated we wanted a boat with a bow-mounted door,” McMahon says, and the department received a quote from Stanley, which won the contract.”

Troy wanted a dedicated gasoline engine to power the fire pump as well as a fully enclosed wheelhouse to protect the operator and crew from the elements.

Douglas Coupar, sales representative for Connor Industries, which owns Stanley, says that Troy wanted a dedicated gasoline engine to power the fire pump as well as a fully enclosed wheelhouse to protect the operator and crew from the elements. He notes that the wheelhouse is climate-controlled by a Dometic Dura Sea rooftop air conditioning unit which has a 1,000-watt heating option installed for cold-weather operations.

McMahon points out that the fire-rescue boat can accommodate eight persons, and that its wheelhouse is protected by HEPA filters and is pressurized to keep smoke and toxins out. “As part of the specs, we had folding benches installed in the wheelhouse, so we have the ability to carry two critically injured patients on backboards inside,” he says. “And with the drop-down bow door, we are able to walk the injured patients off the boat and directly onto land.”

The drop-down bow door also allows the department to lay the door down and run 5-inch LDH off the fireboat and onto shore “to use the fireboat as an endless water supply if needed,” McMahon says. “In front of the wheelhouse, there’s a Christmas tree with a 5-inch discharge, four 2½-inch discharges with reducers, topped off by a Task Force Tips Typhoon monitor with a fog nozzle and stacked tips. One of the requirements of the Port Security Grant was that the boat have foam capabilities, so it was spec’d to hold a 300-gallon foam tote, and we have a 250-gpm foam eductor to proportion the foam.”

Troy’s fire-rescue boat also serves as a dive boat, McMahon notes, as the department had two dive platforms added to the back of the vessel. The Stanley-built boat also has a grounding keel that allows the boat to be eased up to shore to allow it to drop its bow gate.

As part of the specs, we had folding benches installed in the wheelhouse, so we have the ability to carry two critically injured patients on backboards inside

Coupar points out that the fire-rescue boat has two push knees, one on each side of the bow door, that are useful when an operator needs to hold the boat stable against an object. “They might be against a bridge abutment or some other type of object where they need to hold the boat,” he says. “The operator pushes against the abutment with the push knees, lowers the gate, and the boat stays rock-steady, even in a heavy current, because the operator is using engine power to push against the object.”

We use cookies on our website to give you the most relevant experience by remembering your preferences and repeat visits. By clicking “Accept”, you consent to the use of ALL the cookies.
Cookie settingsACCEPT
Manage consent

This website uses cookies to improve your experience while you navigate through the website. Out of these, the cookies that are categorized as necessary are stored on your browser as they are essential for the working of basic functionalities of the website. We also use third-party cookies that help us analyze and understand how you use this website. These cookies will be stored in your browser only with your consent. You also have the option to opt-out of these cookies. But opting out of some of these cookies may affect your browsing experience.
Necessary Always Enabled
Necessary cookies are absolutely essential for the website to function properly. These cookies ensure basic functionalities and security features of the website, anonymously.
Functional
Functional cookies help to perform certain functionalities like sharing the content of the website on social media platforms, collect feedbacks, and other third-party features.
Performance
Performance cookies are used to understand and analyze the key performance indexes of the website which helps in delivering a better user experience for the visitors.
Analytics
Analytical cookies are used to understand how visitors interact with the website. These cookies help provide information on metrics the number of visitors, bounce rate, traffic source, etc.
Advertisement
Advertisement cookies are used to provide visitors with relevant ads and marketing campaigns. These cookies track visitors across websites and collect information to provide customized ads.
Others
Other uncategorized cookies are those that are being analyzed and have not been classified into a category as yet.
SAVE & ACCEPT